from Uforia by Darren Francis 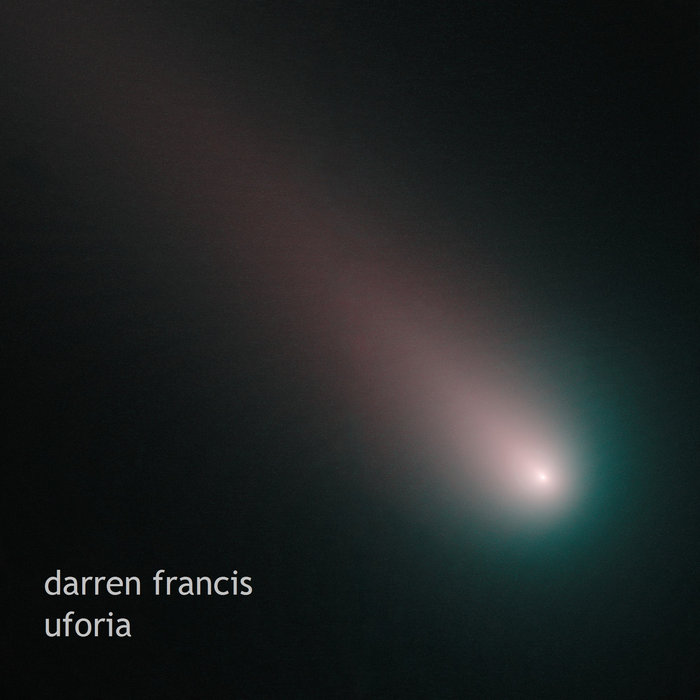 'here,' danny says, turning the car off the road and into a farm track. 'i've used this spot before.'

we glide to a halt under the cover of trees and he shuts off the lights. i look at the clock on the dashboard. it's a few minutes after midnight.

i nod. 'have we got everything?'

he reaches over to the back seat, pulls out a bag. 'of course. let's go.'

outside the car, he slings the bag over his shoulder. 'this way.'

the first thing that surprises me is how dark it is. i can see the silhouettes of trees and hedgerows against the sky, a hill ahead of us, the glimmer of a town ten miles away. danny starts walking, and i do my best to follow; slowly, unable to see my feet, testing each step before taking it.

he's right. soon i can make out his head and shoulders well enough to be able to follow them, to not have to rely on the sound of his boots. looking down, i can even see where i'm stepping.

'i've hit this location before,' danny says. 'we shouldn't have any trouble.'

i've only known danny for a few weeks. we met online, arranged to go for a drink. he outlined his plan. 'are you sure you want to do it?' he said. i nodded, and over a few pints we worked out the details. he sketched diagrams and made notes. 'when do you want to go ahead with it?' i asked. 'we can do it tonight, if you want,' he said. 'i've got all my equipment in the car.' 'okay,' i said. we drove out of town, to a pub by a canal, sat in the beer garden and watched the sun set over summer fields, waited for darkness.

we walk along the track in silence. i'm amazed at the sheer volume of stars that shine down at me. am used to orange and soupy city skies, can't remember when i last saw so many. a crescent moon slides behind the horizon.

'it's a beautiful night,' danny says.

we soon pass a turn-off leading to a building with a solitary light on at the upstairs floor. it looks like a farm-house.

'this is where it gets interesting,' danny says. 'the weekend before last, the place i was going to hit had a dog. it heard us, and barked its head off and woke the whole house up. we had to abort. too risky. we shouldn't have that problem tonight, though.'

at the end of the track, we come to a gate. my eyes have adjusted well-enough now, though i still see only in monochrome; wheat fields stretching away into darkness, a hill ahead of us.

'it's a tree. anyway, even if there was somebody up there, they wouldn't be able to see us. you can see them because they're silhouetted against the sky. to them, looking down, they see only darkness. you do see people sometimes, though. ramblers, people out walking their dogs. once i came across a guy completely starkers, lying on his back in the middle of a field and looking up at the stars. i nearly tripped over him. the last one i did that i was telling you about, last weekend, we did have a couple of people on a hill above us. i think they were watching out for ufos. the guys i was working with were getting off on it, i think, the idea that we might be spotted. they thought it added an edge to the proceedings. anyway, we ought to get started.'

we climb over the fence and into a wheat field, follow the perimeter to a tramline. take it, walk until we can only see crop around us.

'let's do it,' he says. 'you remember everything i told you?'

'we're keeping this one simple, since it's your first time and there's only two of us. seven rings, then we alternate the standing and the flattened bits, then the two circles on the edge. about two hundred foot. i need you to hold this for me.'

he hands me the end of a tape.

'stay there,' he says. 'hold it tight, and don't let your arms move about too much, or our circle will end up wonky.'

he walks until the tape is taut, then steps in a loping sideways gait through the crop. marks out a ring around me, returns to where i'm standing. we walk to the perimeter of the ring he has trodden.

'same,' he says, and marks out another ring around me. we move to the point where the two rings intersect, trace a third ring, then another where this meets the inner ring, another, then another. we return to the centre point. danny opens his bag, takes out a length of board with string looped around it at either end, hands it to me.

'you know what you're doing with that?' he says, taking a second board from the bag. 'you take that bit, that bit, and that bit' - he points into the crop - 'and i'll do these bits. remember the design? you know what bits you're leaving standing, don't you?'

i hook the board beneath one foot, hold the rope like reins, step forward, flatten a swathe of crop beneath me. i'm amazed at how loud it is, a deafening crunch as the stems go down. he'd warned me about this; 'it sounds loud because you're standing directly above it. to anybody on the edge of the field, it just sounds like the wind rustling the wheat-heads.' as i stomp my way through the crop, i'm not convinced.

by the time i start flattening a second segment i'm beginning to feel like i know what i'm doing. i strive to make the edges as precise as i can, then lay the rest of it in a loose spiral from the centre outwards. as i work, my adrenalin surges. i keep glancing over my shoulder and down the tramlines, expect to see a shotgun-wielding farmer advancing towards us. somebody must have heard us, i think. best just do this as quickly as possible, and get away from here.

danny looms out of the darkness as i'm completing my third section. 'i've done the rest,' he says. 'we've just got those two circles on the outside. we'll take one each.'

he's finished before i've barely started, it seems, and stands in the tramline watching as i work. i flatten the last of the circle, collapse exhausted and sweating. my arms ache from holding the board, and my legs are sore from stomping.

'let me just catch my breath,' i say, gulping down the water he hands me. 'it's tiring work. a lot more so than i was expecting.'

'we don't have time to hang around,' he says, tucking the boards back into his bag. 'let's go.'

we don't speak as we walk back to the car. once we're inside, and navigating narrow country lanes back to danny's flat, he says 'so how do you think you did?'

i look at the clock. 'we weren't in that field for two hours, were we? it didn't seem that long.'

'it never does. let's go and get some sleep. we'll come back and have a look tomorrow.'

back in danny's flat, i stretch out on his sofa. flick through a book of pictures of circles, try to work out how they were made. they all look far larger and more complicated than i imagine mine was. i want to ask him about it, how he thinks ours will compare to the pictures, but i fall asleep with the book still in my hands.

the next afternoon, we drive back out. park in the same spot as the night before, walk up the farm track to the field. i feel like a murderer. stalking plants by night and taking them down, then going back the next day to survey the crime scene.

'i don't usually visit them after i've done them,' danny says. 'i just wait for the pictures to appear online, and see what people have to say. but since it's your first one i figured you'd like to have a look. there it is.'

at first i can only see a dip in the crop, but as we make our way up the tramline toward it, it opens out, getting bigger, and i can see the overlapping rings and flattened segments we'd made the night before. we step inside, walk from one section to the next.

'your first circle,' danny says. 'what do you reckon?'

'it's bigger than i was expecting. and not as messy. this bit's quite messy, actually. i think it was the first bit i did. who are those people?'

a middle-aged couple walk barefoot towards us. the woman holds dowsing rods in front of her. they quiver as she walks, cross when she reaches the centre of the circle.

'i like this one,' she says. 'very gentle energies. subtle but most invigorating.'

'yes, but there have been quite a few people in it today,' the woman says. 'the broken stems were probably caused by them tramping about. look at that bit over there.' she points behind us, to a section that danny flattened. 'what a lovely, flowing lay. this is the real thing, definitely. there's no way anybody made this.'

'and it's aligned to that ancient site,' the man says. he points to a distant hill, where a group of megaliths stand silhouetted against the perfect blue sky.

'did you know that was there?' i ask danny.

'anyway, we have to get going,' the man says. 'there's another circle on the other side of the hill we want to look at. have you visited that one?'

danny and i walk away from them, stand at the edge of the formation and watch the wind ripple through the wheat-heads.

'don't mock them,' danny says. 'they can believe whatever they want.'

'of course they are. i know where this circle came from.'

'can you prove it? and even if you could, where would that get you? you'd be prosecuted for criminal damage, and the mystery would be gone. best just leave things as they are, don't you think?'

'don't you feel guilty for deceiving them, though?'

'i haven't deceived anybody. it is what it is. flattened crop. those guys are the ones who are saying it's more than that, not me. it's a bit like those standing stones on that hill. people have wondered about that for years. who built it? what's it for? they're still wondering. they come and see it and they marvel at the precision, at the geometry. i marvel at it, too. but somebody made it.'

i run my hands through the crop, feel the stems brush against my skin.

'you know how to now,' danny says, by which i sense that he doesn't expect to be there the next time i'm in a field in the dark. he's just passing on knowledge. and i do feel as if i've entered into a secret society of sorts. the moon and stars chart our forays. we skirt out under their cover, make our names in wheat fields. by day, nobody knows we were there.

i glance back over at the couple. the woman stands with her arms outstretched, chants rune names.

Bandcamp Daily  your guide to the world of Bandcamp